The Overflow 1895 is a historic grazing property located about 60 kilometres south of Brisbane as the crow flies, 16 kilometres west of Beaudesert and about 20 kilometres east of Boonah.  It spans the Beaudesert-Boonah highway and fronts the Wyaralong Dam.  The newly constructed dam, completed in 2010, forms the northern boundary.  The Overflow boasts approximately 12 kilometres of waterfront land.

It is a special haven of mystic reverence and unsurpassed rural beauty.  As you explore this website, you will find that The Overflow is vastly more than “just another property”. 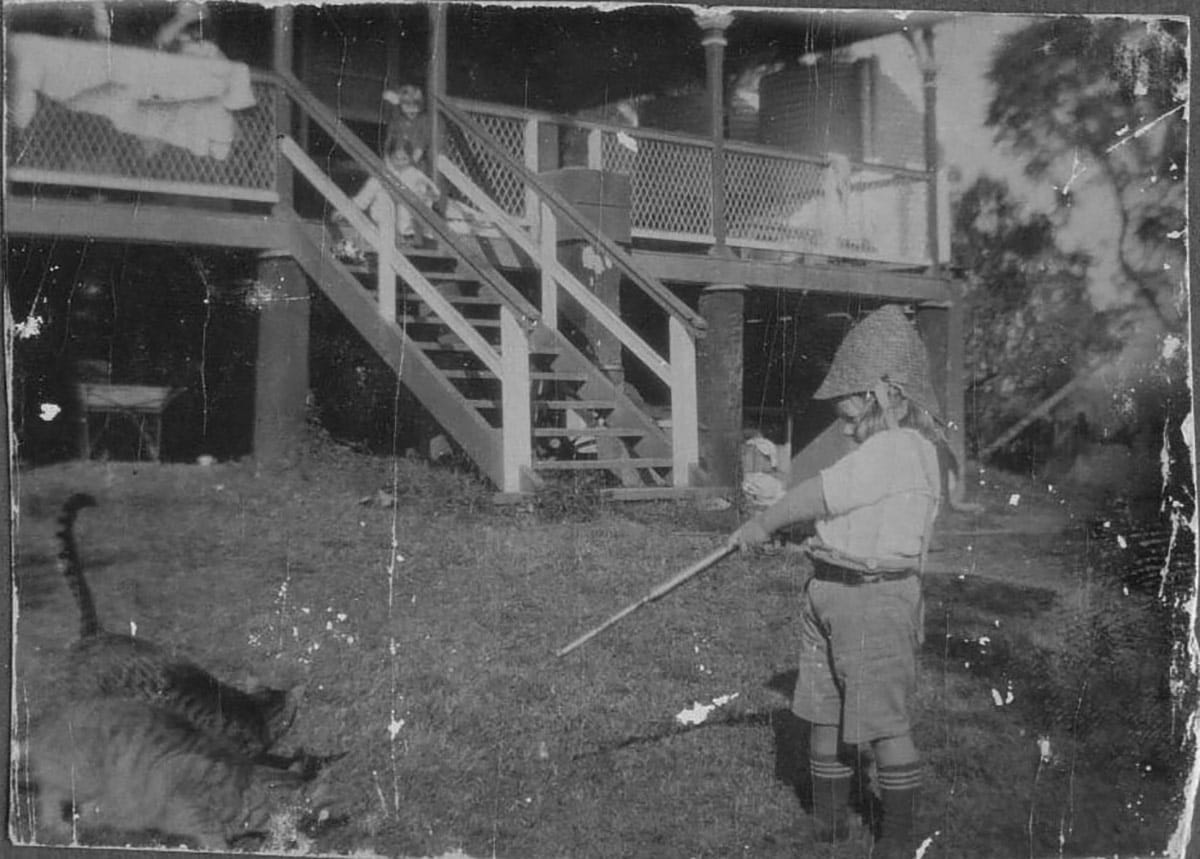 The Overflow is divided into approximate equal halves by the old Beaudesert-Boonah Shire fence.  The original property lay in the Boonah Shire and was purchased by John Jenkins on 1 October 1875.  He paid £938,5s for 3,758 acres.

He subsequently sold it to David Howard on 4 September 1883.  The purchase price was a respectable £1266, 12s 9d.  Mr Howard had to borrow some of the funds from Mr Jenkins at an annual interest rate of 5%.

For whatever reason, David Howard had difficulty meeting his repayments and he sold the property to Gertrude Henderson, the wife of Francis Henderson, for £1400 Sterling.  On this occasion, the sum was repayable on 30 October 1890 at 9% per annum.  Gertrude Henderson was part of the famous Joyce family from Galway.  Importantly, she was also the younger sister of Edgar Joyce.

David Howard died and his widow was unable to make the mortgage repayments.  Mary Henderson placed a caveat over the property and it was subsequently purchased by Edgar Joyce on 8 February 1895.  This is the beginning of The Overflow dynasty with the Joyce family.

The Beaudesert component of the property was first purchased by George Smith in March 1874.  He then sold it to Burgh Persse in July 1897.  Mr Persse was the father of Maria Henrietta Elizabeth Persse, destined to become the wife of Edgar Joyce.  They married in 1890.

The union between Edgar and “Nita” was most productive.  They had a son and eight daughters in that order.  The son was named De Burgh after his illustrious grandfather, patron of the Persses from Tabragalba.  Burgo, as he was called, and his wife Alison moved to The Overflow in 1939.  They took with them their three children – Michael, Alison and David.  The Overflow at that time spanned 10,000 acres.  Burgo was obliged to sell what was known as “the spare country” to Walter Crabb in July 1946 to pay probate.  On his death, Stella O’Reilly inherited that component and it is currently run by her son and daughter-in-law, Barry and Eileen O’Reilly.

All dynasties come to an end.  Michael (Edgar’s grandson) and Jan Joyce managed the property for many years.  They expanded the commercial venture to include sand mining, sandstone quarrying, forestation and a turf farm.
The property was finally sold to the Usher family and the Morgan family in July 2006.  The current owners view themselves as being the custodians of the heritage left to them by the Joyce family originally from Galway. 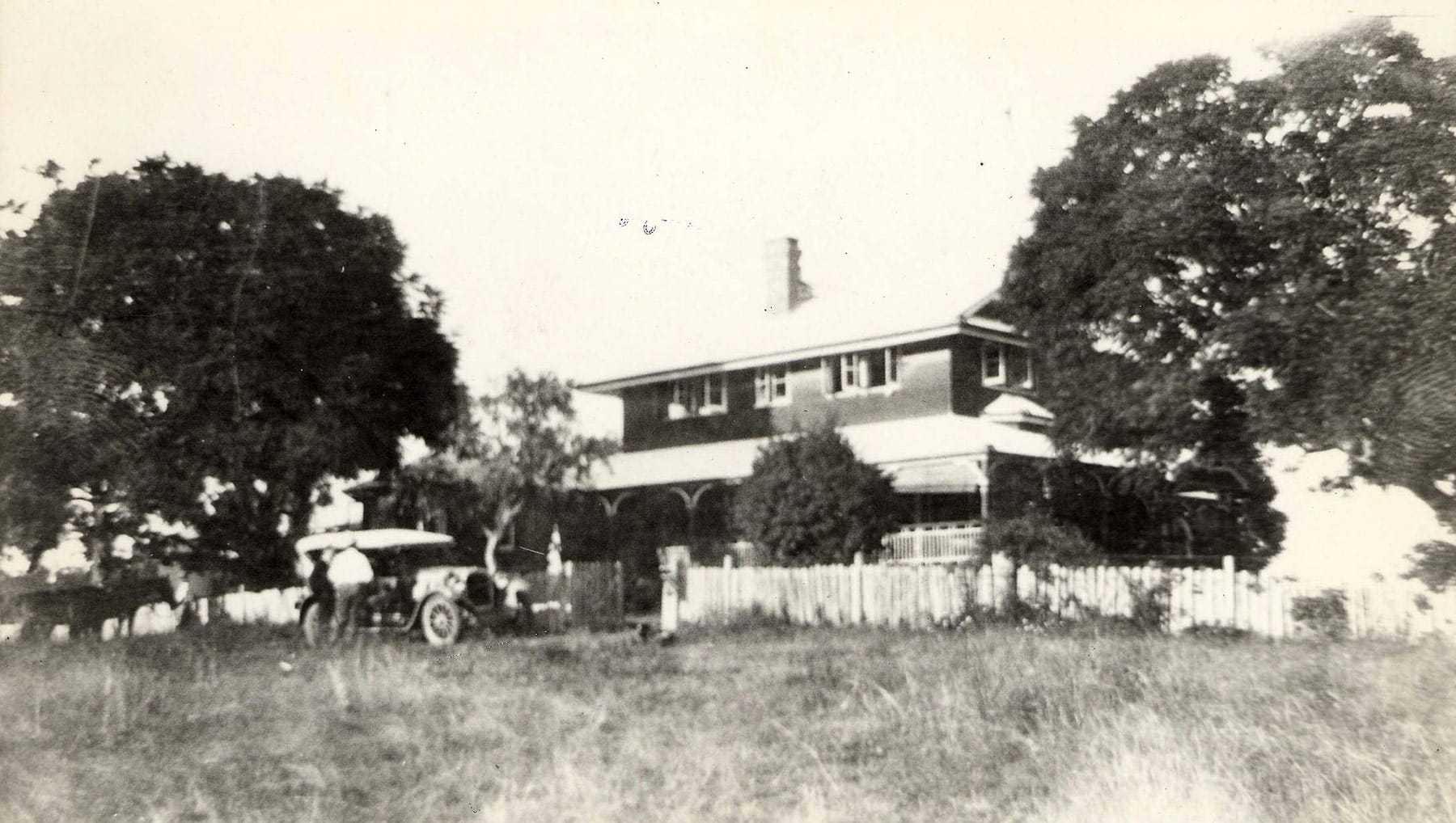 Edgar first pitched his tent under a fig tree on the slope opposite the present site of The Overflow mansion.  He worked his property from that location until he was able to build something more permanent.  The current home was completed late in 1899 and in the first few months of 1900.

The final opening was sealed just in time for the newly-wed Edgar and Nita to take up residence.  As the family grew, extensions were added.  Modules were added to the eastern and western sides of the central structure in 1912.  In 1914, “upstairs” was added.  This was a remarkable feat in itself.

The cedar staircase pierces the centre of the house leaving enough hallway for easy movement.  The top section has no beams.  It is held together by enormous lengths of steel rod joined in the middle with turn buckles.  It is dominated by one large room which has essentially been open to the elements ever since.  The eight Joyce girls grew up in that environment tolerating heatwaves, droughts, wet seasons and frosts. 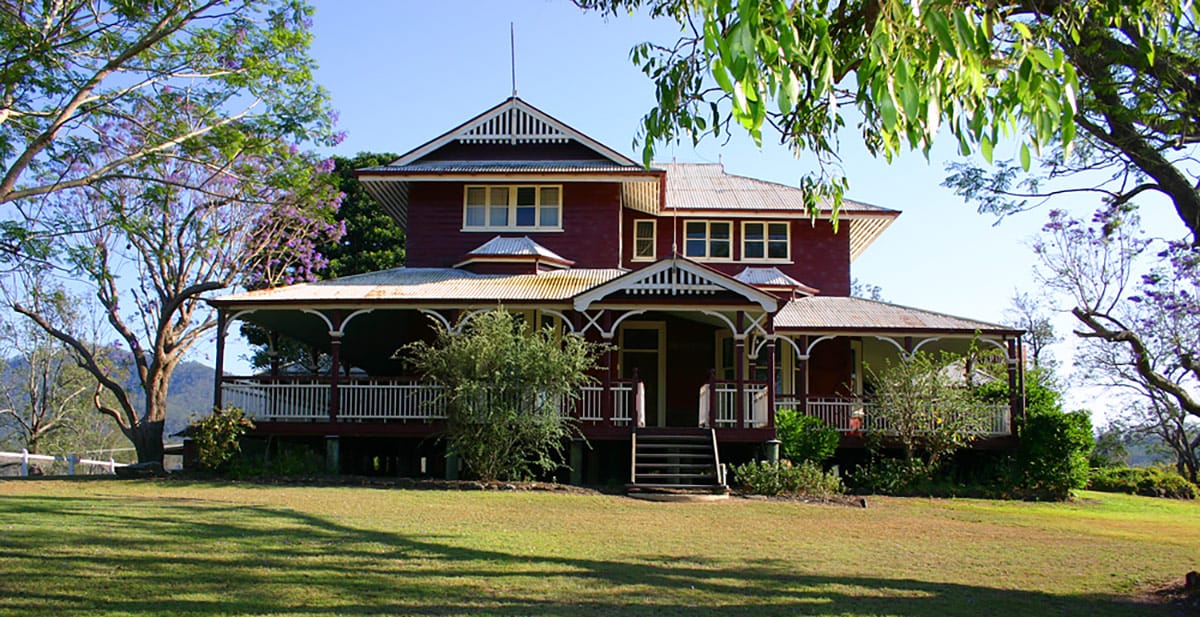 In addition, a sand mining operation continues with materials being extracted for all varieties of construction work.

The property is liberally blessed with enormous sandstone deposits.  One such area, known as the “Hill of Stone” has been mined continuously for sandstone blocks since 2000.

Some 1200 acres have also been placed under eucalypt forest cultivation.  A Japanese paper mill established the forest without adequate forethought.  Whilst the trees in the gullies have flourished, those near the crests of hills with shallow surface soils covering the sandstone outcrops failed to thrive.  The Japanese company relinquished the lease to the current owners in 2006.  The forest still stands and may yet yield some profit.

In 2010, The Overflow Estate 1895 vineyard was established.  This is a three acre holding with 2,500 vines located on the island with the main house in the magnificent Wyaralong dam.  So-called “climate change” varieties have been chosen.  They include Vermentino, Fiano, Tempranillo and Montepulciano.